Last week I had to do a last minute trip to Thailand and I want to show you some of a few things I ate there. I have forgotten how spicy real Thai food is after living in london for 10 years. The first few days my stomach was definitely on fire and telling me to stop but my mouth just wouldn't. "Eat first worry later" I kept telling myself.

My first meal was a killer. I really should have gone in slowly and gradually but I went straight in for the kill. And it killed me.


Nothing beats street food in Thailand. People usually think street food in Asia is dirty and will give you a bug but I have been eating street food since I was little and the entire population eats street food. Its part of our culture. One of my favourite street food dessert is Kanom Klok. Like all Thai desserts it is coconut based with a hint of sweetness and various toppings including pumpkin, taro, corn.


Now let me introduce you to something that is commonly found in South East Asian cooking. Pandan is a plant found in SE Asia that has a distinct flavour and smell. It is used in Malaysia, Vietnam, Thailand and India. In Thailand we use it mostly in desserts, but we sometimes use the leaf to wrap food we plan to cook - such as chicken or fish.

I know, I know, that green looks too suspiciously green but you gotta trust me, it is not whatever you might think it is. It's pandan sweet custard, and one would dunk their bread or donut into it and enjoy! Trust me its good. This is the kind of breakfast you can only find from the old man who lives in the old house who has been making it for 30 years. These things are the best.

After a week, it was time I head back to London, but not without stopping at a street food market on my way to the airport to do some last minute shopping and getting my last Thai meal of the trip.


Lastly, I was watching some Thai children playing in the street and I saw that they were sharing a pack of crisps. I went over and had a looked and thought that it was the coolest crisps I've ever seen. So the child in me went out and bought one :) 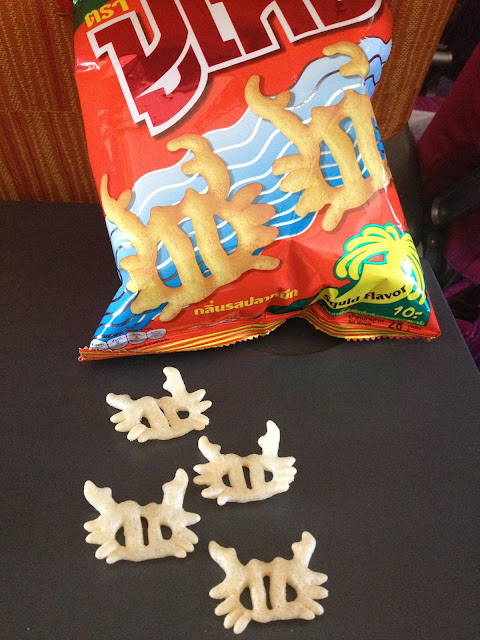