Hiking in the Atlas Mountains

"oh shoot I forgot my trainers in London!"
"How can you forget you knew we were hiking"
"I don't know, I just forgot. I brought 4 pairs of heels though"
"Let's go to the souk, we will get you a cheap one"

After a few trips to the souk I realise that there is nothing there you can't find. After paying ten pounds for my new fake Nike I was happy I didn't have to hike in my heels.

Marrakech is a hectic mess but drive an hour outside and you start seeing beauty you never imagined existed in North Africa. The green, calm, cleanliness and fresh air will make you think you were in the Alps if you would ignore the random sightings of goats, donkeys, old lady sitting alone by the side of the road, more goats, and argan trees. 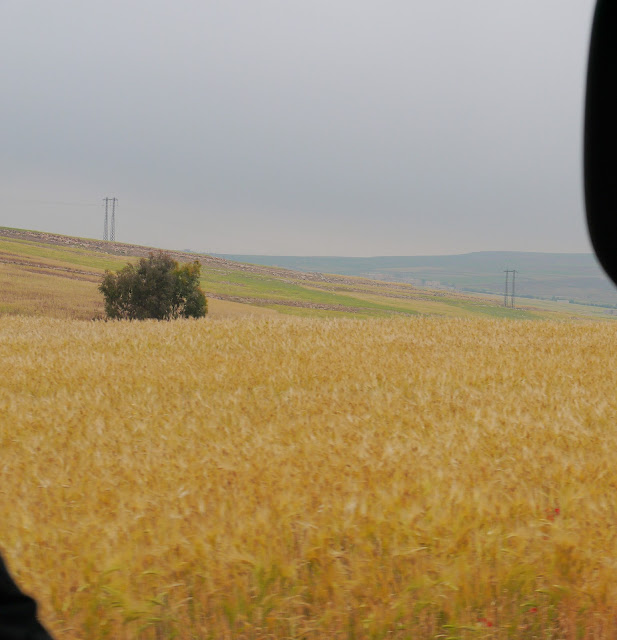 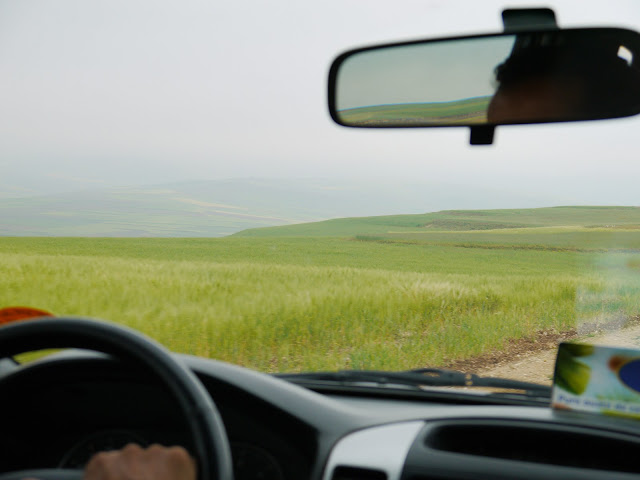 The 4x4 picked us up at 9am and drove for 2 hours into the wilderness of the Moroccan country side passing through numerous small mountain villages and settlements. We saw a helicopter flying above our heads heading the same direction we were going. "The helicopter is for the guests of Richard Branson's hotel he has up here in the Atlas" our driver informed us. I knew exactly what he was talking about because only a month ago I discovered this hotel when I was browsing for places to stay in Morocco. 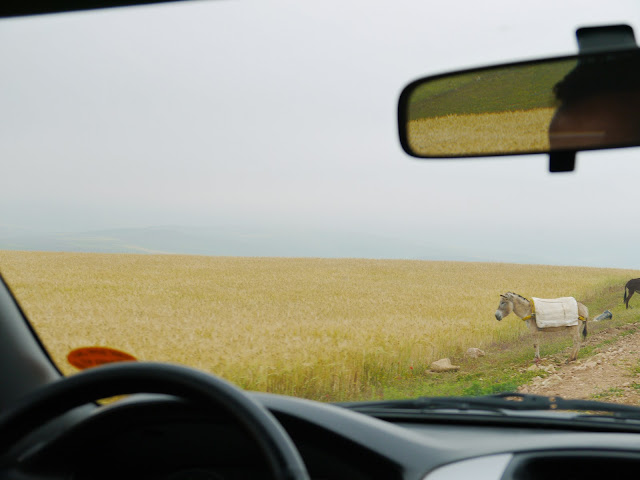 Soon we stopped for a quick snappy snap at the top of a hill but unfortunately there was so much fog that day we couldn't see much. Just when I was about to get disappointed I heard the sound of a child crying. I turned around and couldn't see where it was coming from. A few seconds later a young boy opened the doors to a little hut and gushing out were goats of all sizes. I had lost count and it still kept coming. Some were so small its cry sounded just like a baby's. 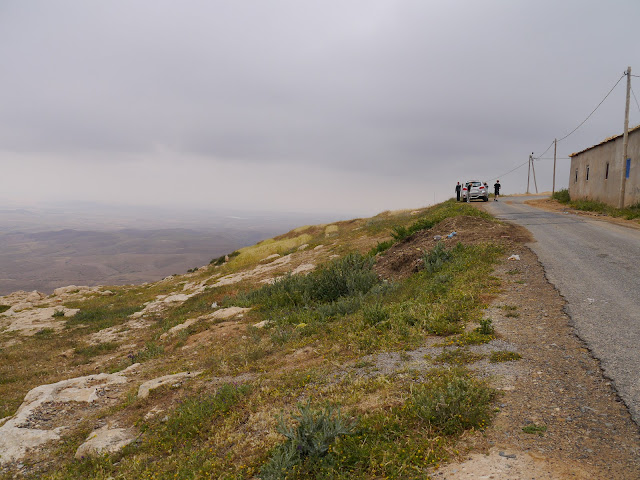 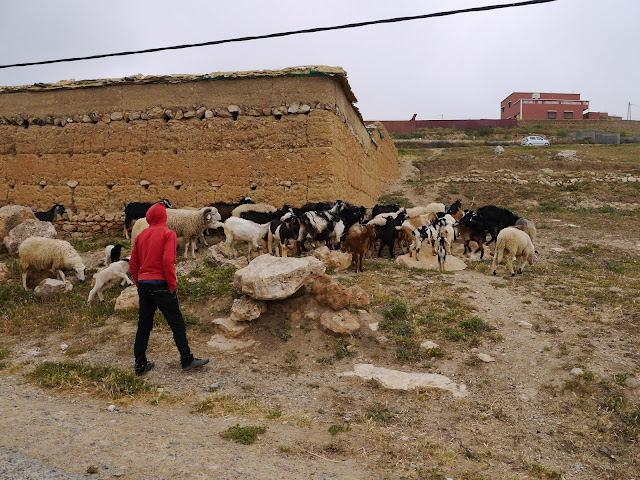 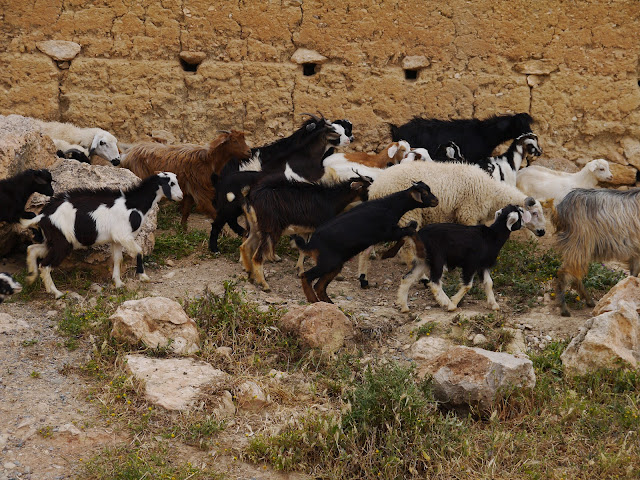 Finally we arrived at a small Berber village where our mules had been waiting for us. We got changed into traditional Berber coats to keep us warm (we were all under dressed), hopped on our mule and off we went. 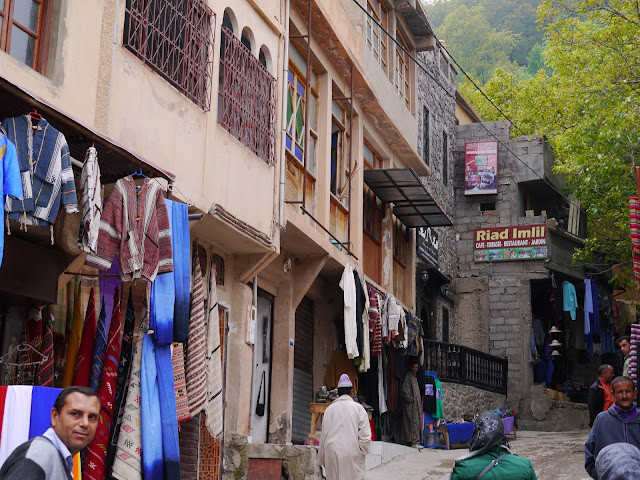 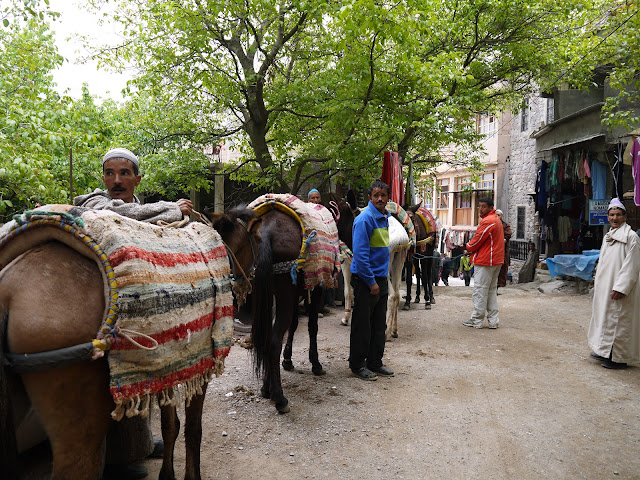 I trusted my four legged friend a lot that day but I would be lying if I said I wasn't scared. The down hill part of the trek was so steep and rocky that I wasn't sure if Whitey (my mule) could even handle it. I kept feeling like I would fall head first while I fly over the front of Whitey's head every time he made a step downhill. By this point I started getting jealous of the people who opted for the walk instead of mule ride. Saad's mule for some reason LOVED to walk along the extreme edge of the cliff even if there were lots of room to his right. But it was funny hearing Saad scream so I didn't do much to help out. 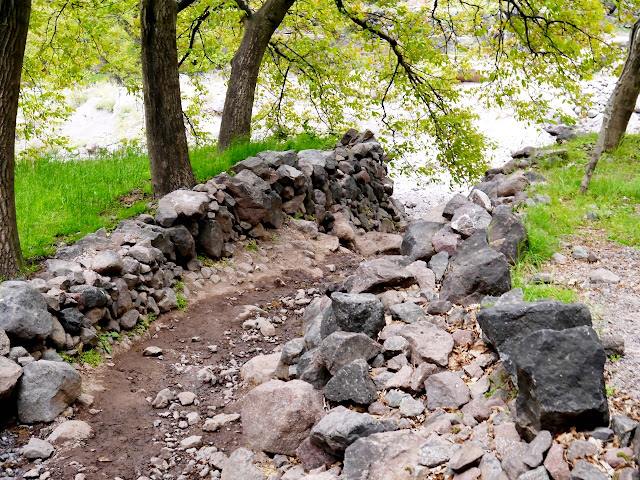 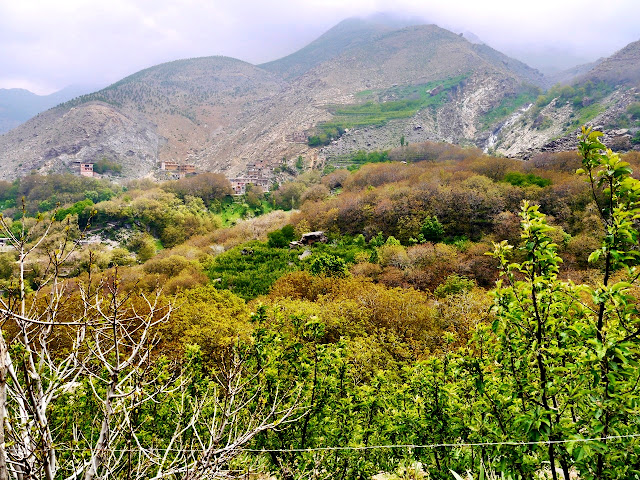 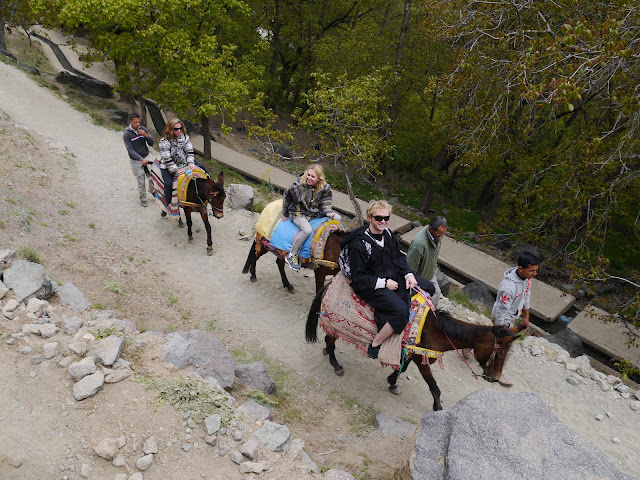 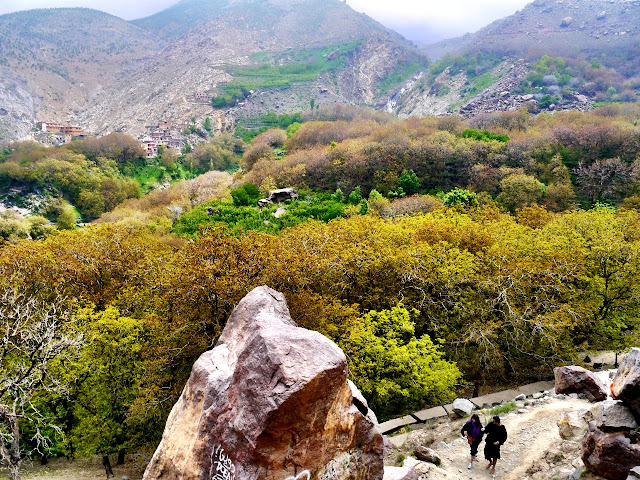 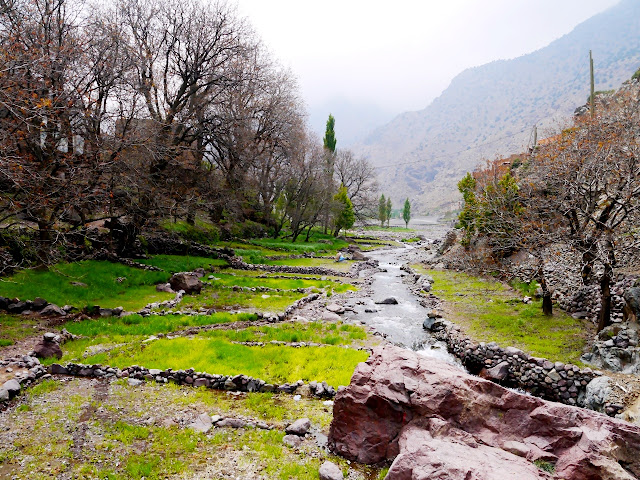 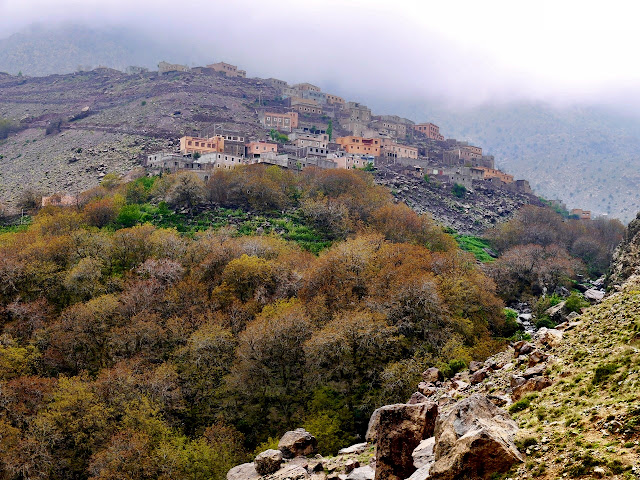 After an hour it was time to stop for lunch and we were glad to get off our death trap. The mule man signalled for us to get off and then he took off without saying good bye. We looked around confused and unsure if this was the right place, it looked like a construction site.
"I think this is where we are eating" I said.
"It doesn't look like building has completed" Ani added.
"Let's wait here maybe someone will come out to welcome us"


Ten minutes later nothing had changed so we decided to venture in. There was a chicken enclosure on the left which I assumed will become lunch in the near future. On the right there was a dark room with a small window where a horse was poking its head out. Still no humans to be seen. We walk in further and discovered a dining room so we sat down.
"Are you sure this is where we are supposed to be and we haven't just sat down in some random person's living room?" someone asked.
"We will find out soon I guess" Nina replied. 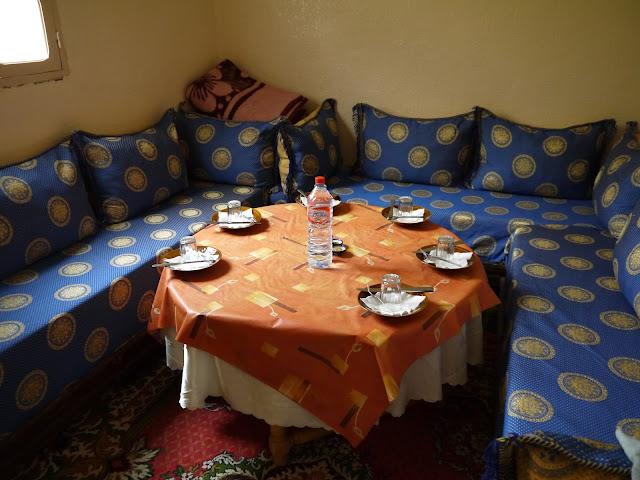 Fortunately not too long after a man appeared with a big plate of salad and bread and then disappeared. I ran out after him to see where he had come from but he had gone. Weird. I went back inside and finished my portion of salad and then the man reappeared with a big plate of cous cous for us to share and then he left again without saying a single word. I didn't follow him this time, I was too concentrated on the cous cous. At the end of lunch he reappeared again with some fruits and tea. How is he doing this?! I was too full and had given up on finding out. 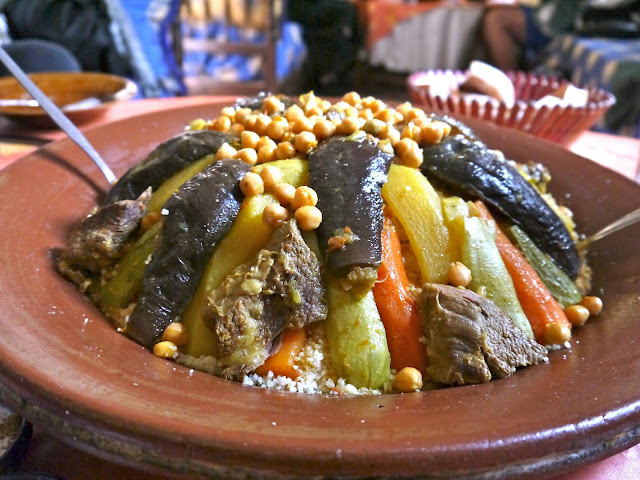 After lunch we completed the last leg of the journey on foot in order to digest our cous cous which at this point seemed to have expanded even more in my belly.

If you are in Marrakech and have time I would highly recommend you getting out of the city and visiting the countryside. It really is unforgettable.

Email ThisBlogThis!Share to TwitterShare to FacebookShare to Pinterest
Labels: africa